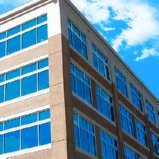 All buildings in Feng Shui are analysed according to their shape, material and colour according to the Five Elements, the principles of Yin and Yang and Form School. The direction in which the building faces, as well as the surrounding structures determine whether it is auspicious and in harmony with its environment.

Within the building itself, the position of architectural features such as doors, windows and corridors have an effect, as well as the style and type of decoration and furniture used. In order for those living or working within the building to prosper, all of these aspects should be in harmony.

The radical shape minimises the surface area exposed to direct sunlight (approx 25 per cent less than an equivalent rectangular building) and saves energy. From a strictly Form School perspective, the flowing design is ideally placed on the South Bank of the River Thames, although it does resemble a pile of coins falling over. In Feng Shui terms it is the metal element, which is good for a municipal building.

Developed to create a village type community and improve staff morale and efficiency, it has a unique street atmosphere with shops, library, a fitness club, cafes, restaurants, and quiet work and meeting spaces. Surrounded by a 280-acre park and three small rivers, its angular forms make this a fire building, although from the picture it does look more of an earth type building.

This unique luxury hotel completed in 1999 is built on its own island in the shape of a dhow, a type of Arabian vessel. An interesting example of wind and water! It is the fourth tallest hotel in the world, although almost forty per cent of its total height is made up of non-occupiable space. Standing on an artificial island, it is connected to the mainland by a private curving bridge. In Feng Shui terms, this is a wood type building, which means that it receives a lot of support from its water environment.

Begun in 1957 by Architect John Utzon with his competition winning design and eventually completed in August 1973 under the direction of Sir Peter Hall, this building is surely an architectural landmark of the 20th century. In Feng Shui terms, its angular designs mean it is classified as a fire type building; perfect for housing the arts. However, its water environment may lead to disagreements, particularly amongst staff.

Opened in 1994 to relieve overcrowding at Osaka, Kansai is on a man made island. Sinking into the soft soils of Osaka Bay, it sits on hydraulic jacks. The soaring wing-like passenger terminal stretches for over a mile and wide atriums reach over 60 meters to the curved ceiling, where colourful mobiles float on a gentle breeze. This water type building within a water environment is perfect for travel and communication.

Winner of the "Best New Skyscraper of the Year" for design and functionality in 2002 is based on historic geomantic principles and houses commercial offices, residential apartments and the Four Seasons Hotel Riyadh. This 99-storey, 992 ft skyscraper is the second tallest skyscraper in Saudi Arabia and the world's third tallest building with a hole. This is a metal type building, in a fire and earth type zone.

Do you know of a building that deserves to be included in the Feng Shui Gallery? If so, e-mail us.

The principles of Yin and Yang and universal balance explained.

Using the Feng Shui Bagua energy map in your home or office.

The ancient trigram symbols that contain great knowledge and wisdom.

Traditional Feng Shui from the Chinese dynasties through to modern methods.