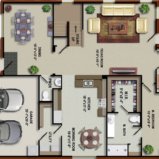 The Late Heaven Bagua is the most well known and often the first method most people encounter when studying feng shui. Also known as the "Eight Life Stations" or "Eight Life Aspirations", the Ba Gua is also the most commonly used Feng Shui method.

The Ba Gua, meaning "Eight Trigram Divination" is based on a Macrocosm/Microcosm relationship where each compass direction or section of a building represents a different aspect of life. A bagua map is a tool used in modern forms of feng shui to examine the interior of a single room or building to see whether it is harmony with the natural energy of the space. When these features are in harmony, life for those spending time in the space flourishes; when not, a particular aspect of life may suffer.

The bagua map is divided into eight sections; elders, fortunate blessings, illumination, relationships, children and creativity, travel and helpful people, journey through life and inner knowledge. Each section also has one of the Five Elements associated with it, as well as a trigram, colour, shape, member of the family and part of the body. Everything within each sector, including how the room is used, as well as the colour and fabric of furniture, wall coverings and flooring, plants, water features, fish tanks and decorative objects have a direct impact on the life of anyone living or working there. Once correctly analysed, cures can then be put in place to bring harmony and balance to the whole space.

As mentioned earlier Ba means "eight" and Gua translates to "trigram divination". The life aspects are derived from the eight ancient symbols known as Trigrams, although many western sources describe the Ba Gua as a nine square grid, similar to that drawn in a game of "noughts and crosses" or "tic-tac-toe". This modern format may well be an easier way to apply the Bagua to a building, but it is not how it was originally intended to be used and can create problems when applied to a building.

Firstly, Ba Gua refers to eight trigrams, not nine, but most importantly, energy is not retained within square shaped boxes. In fact, energy within any given space raditates towards the centre, so to correctly use this method, only eight sections should be demarcated. Traditionally, a Luo Pan Chinese compass is used to designate each area, although it is also possible to draw the Bagua onto a scale floor plan.

Feng shui was made very popular in the west thanks to the Bagua and its ease of use. However, it does not take into account the local landscape, the specific energy of the people within the space, and more importantly, how energy changes over time. The Bagua is also a great source of confusion because at basic levels it can be overlayed onto a floor plan according to the compass directions, as well as in a much more simplified way according to the main entrance.

People also encounter problems when their home is not perfectly square or rectangular, and has extensions or "missing" areas, although there are ways in which to bring the space into balance.

In practise, the Bagua is useful but is just one of the many methods used by traditional feng shui practitioners.

Discover the other types of Feng Shui - Feng Shui Methods

Find out how colour is used in Feng Shui according to the Five Elements.

Our gallery & analysis of Feng Shui buildings from architects around the world.